There have been two STREET CABINETMAKING events. The first, in Dundee, during the city’s literary festival, officially launched the book on the Kindle store.. In a miraculous warm, dry spell between heavy rain showers, four artists\handymen became cabinetmakers for the day. They made small pieces of furniture to entertain passers-by during the Dundee book festival, centered around the Perth Road  university campus. Thanks to Mickey, Dave, John and Fraser for putting on a great show and for producing very creditable pieces of furniture in our makeshift open-air workshop.

We repeated the event at Bloody Scotland in Stirling to launch the paperback, and this time if was the author and Michael, his apprentice, who made three different pieces of furniture on the day, talked to festival-goers and sold copies of The Cabinetmaker.

All the furnitture made at these events was given away in a competition run on Twitter, and one of the benches takes pride of place on Rathlin Island, off the coast of Northern Ireland. 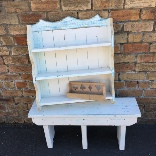 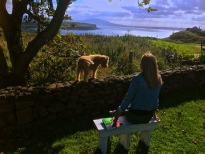